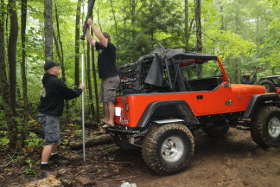 As a part of the OF4WD commitment to a sustainable trail system in this province we work diligently to enhance relationships in all aspects of the sport. An especially sensitive aspect is establishing good relations is between trail users and neighbouring land owners. While not only important in the province of Ontario this topic is very highly regarded in all of North America and abroad.

Green’s Mountain near Gooderham, Ontario, is one of this provinces heavily used trails with awesome obstacles and breath taking views. This virtue comes with problems in people behaving correctly and respecting the nearby landowners. While not in plain sight, these land owners have been impacted by the trail and have come forward asking for assistance. 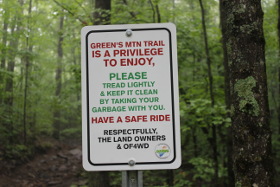 In early 2013 OF4WD’s Brian Sibbles met with the landowners to discuss their concerns. While they stated that over the past 3 to 4 years things have been drastically improving in the area and they are really seeing a change in peoples behavior there were still a few issues to resolve.

A trail leading off the northwest side of the mountain drops users down a steep incline and onto private property where they cannot turn around and head back up the slope. Being behind a locked gate they have created other means of getting out to the road causing some headaches for the land owner. 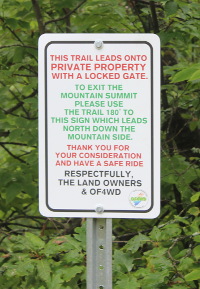 The access road leading into the trail is maintained by the landowners and over the past couple of years some people have treated it like a race way tearing up the tread and leaving ruts from time to time. In their opinion this is caused by vehicles moving too fast and heavy vehicles pulling trailers on the hills loaded with off-road vehicles (ATV’s, Motorbikes, OHV’s)

Garbage left on the trail by all users has always been an issue, they asked that we try and further educate people to clean up after themselves. 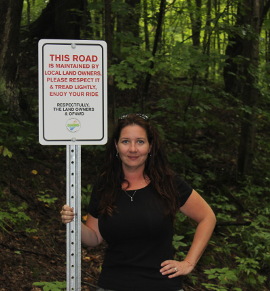 Last but not least trail users were using the nice flat spot on the access road where it meets Hwy 507 to conduct their airing up of tires and loading. Standing there idling and playing load music at all hours can be disruptive and annoying to nearby residents.

The landowners mentioned that 95% of the users are really good and very respectful. It’s a set few we need to educate and intercept. The conclusion was to erect educational signs to help the trail users understand some of the impact they may have and better understand the areas diversity.

In August 2013 the OF4WD erected signs designed by Aaron Darling, and installed by Brian Sibbles, Mark Bachman, Connie Muller and Tami Hamilton. While the rocky terrain gave them grief the signs went in along the access road, top of the mountain and the trail entrance. 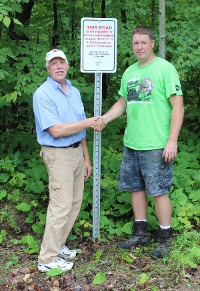 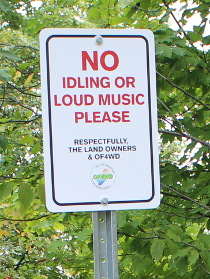 Landowners are very pleased with the speedy response and will be monitoring the signs and actions to see how people respond.

Just another way the OF4WD appreciates your membership and sponsorship dollars in allowing us to build better relations and a sustainable future for 4WD.