Home › New Bridge on the Sweat of Volunteers

New Bridge on the Sweat of Volunteers 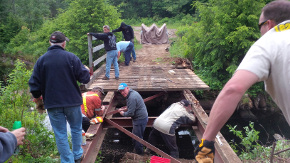 Story by Branded Jones and Written by Brian Sibbles

If you are a trail rider in the province of Ontario you are very familiar with water, we’ve got a ton of it. While it is fun to drive through at times, it is not preferable by the MNR and sometimes virtually impossible due to the banks or water depth.

Bridges play a crucial part in linking our trail systems together and allowing us days of non-stop fun and excitement. So where do these bridges come from?

Who puts them in and maintains them? 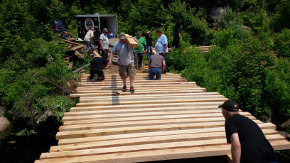 Well, it’s not a black and white answer of how they got there; sometimes they were put in by logging companies, Snowmobile clubs or other trail user groups. And who maintains them after years of neglect and weathering, it’s the dedicated volunteers of each trail user group.

A prime example is the bridge located on the Anson North Trail Northwest of Canarvon Ontario. This bridge has been falling apart for many years and becoming dangerous for ATV’s and Off-road vehicles. Haliburton ATV Association (HATVA), the prime ATV club in the area, lead the charge in putting the wheels in motion to get this bridge repaired. As committed leaders in multi-trail user team work HATVA approached the OF4WD and asked if they could provide person power to get this huge job done. 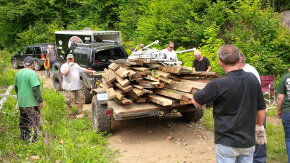 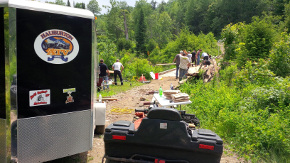 A team of OF4WD volunteers led by Rob Rea and Branden Jones met up with HATVA work crew on a rainy Saturday morning. Travelling to the bridge location they found the new timber had already been dropped off the day before awaiting install but there was one problem. The old rotted out wood was still attached to the steel frame of the bridge. 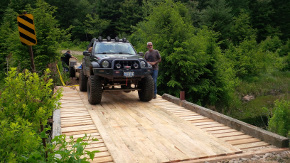 The old rusted bolts were playing hide and seek with the volunteers making the removal of the old tread very tough. Rotating through volunteer roles using hammers and pry bars removing the tread was finally completed around lunch time and to make things even better the light rain began to stop. Excellent, the day is going well.

Out of nowhere the volunteers were greeted with a provided lunch by HATVA of Pizza and pop which was delivered to them on the trail. How awesome is that, these guys are amazing!

Completing lunch and the sun now starting the shine the bugs decided it was time to feast, like a moving buffet the volunteers smacked and swatted the intruders eventually finding that much needed bug spray and drive to continue on. They’ve got a naked bridge to complete. 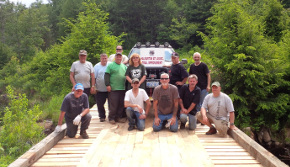 The volunteers got back at her swapping roles and pounding in new spikes to install the brand new timber. Working like a well-oiled machine the team completed the bridge tread in only a few hours where it was time to pack up and remove all the old debris off the trail using the OF4WD maintenance trailer. Dropping the garbage off at the dump the crews headed home, tired but proud of a job well done.

The board of directors would like to thank all the volunteers who brought us all a new bridge to ride on. If it weren’t for you, we’d likely be down a trail this year. We’re indebted to you,